Adorning the cover of Diana Donald’s classic The Age of Caricature is a Gillray print with which scholars of Georgian culture are all too familiar – his VERY SLIPPY-WEATHER (Hannah Humphrey, 10 February 1808). In the foreground a grotesque cit slips while traversing an icy footpath, but the eye is drawn away from this calamity to the spectacular setting of the design – the print-shop window of Hannah Humphrey and the multi-class crowd who gather to admire it. 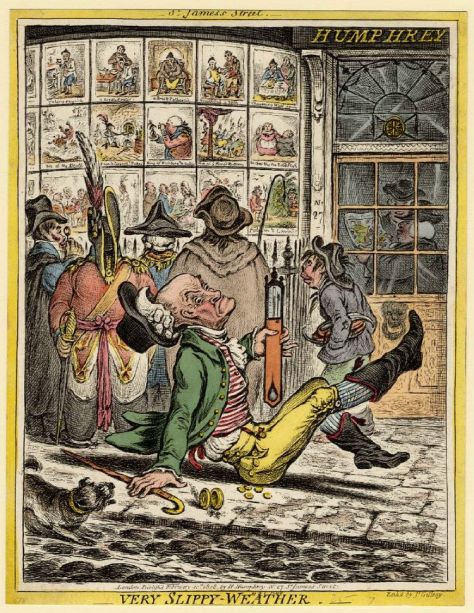 Historians have rightly displayed caution when using such scenes as windows (no pun intended) into Georgian social life. Satirical prints are, after all, representations of urban life rather than representative recordings of metropolitan scenes. The print-shop window has, however, tended to provoke something of a methodological amnesia in scholars. Hence Donald, like M. Dorothy George before her (in Hogarth to Cruikshank), tends to see such scenes as proof of the egalitarian nature, reach, and intention of satirical prints and the trade in graphic satire.

This, I argue, is false, and the print-shop window scenes such as these are red-herrings. My reasons are as follows:

Post-Donald the print-shop window has become a useful and largely unproblematised shorthand for the ‘popularity’ and ‘public’ reach of satirical prints in the late-Georgian period. This has, I argue, distracted us from the task of understanding the commercial, economic, material, and environmental realities within which these works were produced; from seeing that form and function shaped profoundly the process of constructing representations.

2 thoughts on “Rethinking the print-shop window”