The work I have been undertaking for the British Cartoon Archive‘s JISC funded CARD project is now taking shape. This second post on a teaching aid I am creating called ‘Memory and Remembrance’ (first post here), gives you a work-in-progress glimpse at what I am up to. Here I discuss the use of Nelson as symbol in British cartooning. Enjoy! 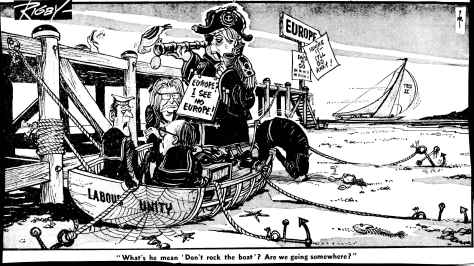 Perhaps the most significant and long-lasting legislative decision of Edward Heath’s single term premiership was to take Britain into the European Economic Community (later European Union) on 1 January 1973. The Labour opposition, still led by Harold Wilson, was fundamentally divided over the issue, and on 13 December the party leadership voted to boycott the EEC Assembly in which they were due to have a presence on British accession to the EEC.

Wilson thus becomes Nelson, blissfully ignorant of long-term political realities (‘IGNORE IT – IT’LL GO AWAY!’) and how splits have bogged down his party – his shipmates are the pro-Europe Roy Jenkins (front-right), who led 69 Labour ministers to cross party lines and vote with the Conservatives for entry to the EEC, and the anti-Europe Michael Foot (rear-left). Rigby underlines the ‘I’ in ‘I SEE NO EUROPE’ to highlight Wilson’s distance from the unions, whose far-left leadership had voted en bloc at recent party conferences in favour of Labour support for pan-European market economics.

Wilson-cum-Nelson is thus an antiquated isolationist political symbol. And he and his ship contrast starkly with the Heath’s modern vessel speeding across the horizon – splendidly named ‘TED II’. 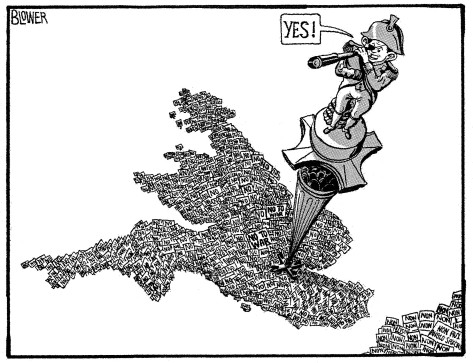 For example Cummings uses these constructions to reproach Prime Minister Harold Wilson for his denial of opposition claims, in the run up to the 1970 General Election, that crime was out of control.

Blower, in a cartoon published exactly 33 years later, deploys a similar if more ambitious design. In doing so he returns to the column the symbolic grandeur it would have possessed upon construction, now diminished by the presence of much taller structures in the metropolis. The memorial thus watches over the nation once more, yet the Blair-cum-Nelson found atop it has propelled the column to such a height that he is disconnected with that which underpins his platform. We are then presented with a pseudo-Ivory Tower, for whilst Blair say ‘YES!’ to proposed war with Iraq, his people resolutely state ‘NO TO WAR’. Days later on 15 February 2003 tens of millions took part in a coordinated international day on protest. Despite this US, British, Polish and Australian forces invaded Iraq on 19 March 2003. The combat mission in Iraq ceased officially on 31 August 2010, though a US occupying force remains in place. Casualty estimates differ, but it is claimed that between 500,000 and 1 million people have died as a result of the conflict. Blower’s cartoon suggests that it is Blair and not the British people who must be held accountable for this loss of life.