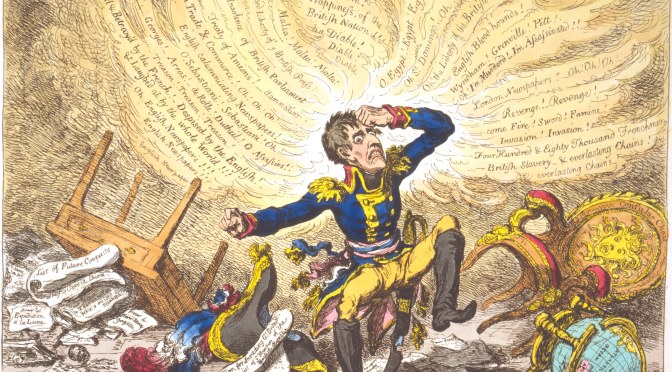 “So, what is the difference between social and political?”

“Have cartoonists today then lost something compared to their ancestors?”

Much akin to the inquisitive innocence of a first-year undergraduate seminar, public talks have a habit of throwing up the sort of big questions you would rarely face in the safe surroundings of a research seminar or subject specific conference. Which is precisely why when invited by the Nottingham Contemporary to take part in their public programme alongside an exhibition of some classic Gillray’s I jumped at the chance.

An overemphasis on Gillray is, in my opinion, something scholars would do well to get away from (though without question brilliant, there is much more to the Georgian print trade than just Gillray). That said, the decision by the Nottingham Contemporary to exhibit Gillray’s alongside the extreme bodies of Mika Rottenberg’s delightful video art did provide room to discuss some aspects of Georgian social satire deserving attention – in particular notions of prosthetic femininity and masculinity explored in my doctoral research.

I should of course use the word ‘social’ with caution. Parasols for 1795 contains both political and social narratives. Yet it does not contain the ‘high’ political narratives of parliamentarians, party politics, and foreign affairs which have tended to dominate studies of Georgian satire (Gatrell’s City of Laughter proving the major exception here). Instead it is most usefully read alongside those light droll satires which emanated from the Laurie & Whittle stable throughout the 1790s and 1800s, satires which underpinned the trade discursively, commercially, and financially.

After my stint in front of the bright lights and enthusiastic audience of ‘The Space’, I returned the next night to act as a discussant for Richard Taws‘ paper on ‘The Revolutionary Image, from Gillray to Haiti‘, during which (somewhat surprisingly) I learnt a great deal about the Chappe telegraph.

Richard’s close readings of a wide range of visual art brought me back to a question from the previous night – the possibility that cartoonists today have ‘lost’ something compared to Georgian caricaturists. For the audience member who asked the question, a deep scrutiny of satirical prints in the Georgian period was tied to the prints being commercial entities, something ‘lost’ by the required immediacy of a cartoon printed in a modern newspaper, magazine, or online environment. Though I would hardly suggest the openness of cartooning today has diminished the ability of audiences to pay close attention to satiric nuance, there is certainly something in this. Georgian satirical prints are not the same products as modern cartoons (or indeed nineteenth-century cartoons). To better understand the former then, we must (I argue) technologise it and by doing so think of it as a product for which, to paraphrase the historian of science Adrian Johns, ‘we need to forget what we think we know’. In this case that which ‘we think we know’ is, of course, the similarity between ‘cartooning’ now with ‘caricature’ then. For although this often works on the level of representation, it does not with respect to the works as physical objects nor when considering the commercial environments they operated within.

A rough transcript of my paper, entitled ‘Ridiculous Liberty‘, and supporting slides can be downloaded below. Video recordings of both this paper and the paper by Richard Taws are available on iTunes and will be shortly available on YouTube courtesy of the Nottingham Contemporary.

UPDATE 2 July 2012: A blog about my experience of the Rottenberg exhibition is accessible here.