Last week on the British Library Digital Scholarship blog I wrote about how historians of science and technology, and in particular work by Thomas Kuhn, offer a way into thinking about science that might prove useful to digital research, especially quantitative work. For the science Kuhn writes about in ‘The Function of Measurement in Modern Physical Science‘ is a mode of enquiry that involves approximation of data, the development of instrumentation to test theory and scrutiny of measurements (and hence instrumentation) against their fit to theory, and human intervention at every stage of research process. Seen like this, science doesn’t seem quite the same super objective beast we humanists worry ourselves about when peeking over the fence, from our culture to theirs. 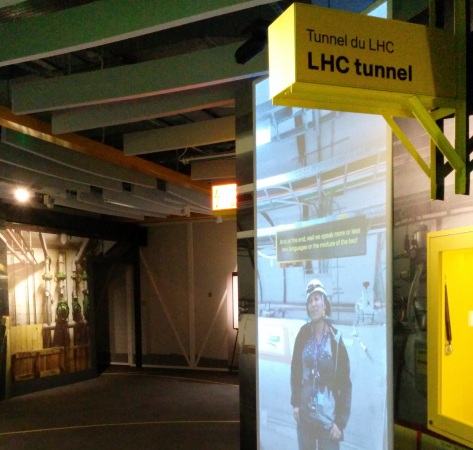 Yesterday I visited the Collider exhibition at the Science Museum (open through May 5th). The work at CERN fits Kuhn’s model rather well. The decades of experiments that led up to the discovery of the Higgs Boson (gross simplification alert!) were conducted to prove the existence of something theoretical (the Higgs), without proving the existence of which something else scientists rather like – the Standard Model – wouldn’t work. In order to achieve this discovery, experimental instrumentation had to be developed, or in some cases theorised as the components didn’t exist to withstand either the energy of the collisions expected in the Large Hadron Collider (hotter than the sun) or the conditions the equipment had to function within (colder than deep space). And even then discovery is not quite the right word, as the existence of the Higgs is derived from the measurement of things in a tiny fraction of the 20,000 or so ‘interesting’ results from the 30,000,000 collisions per second (yes, per second) between protons taking place in the LHC. The Higgs itself decays so fast (in 0.000000001 seconds of something…) that we don’t have the instrumentation capable of measuring it.

All this work requires people. One of the great achievements of Collider, apart from explaining what the LHC does in clear digestible chunks, was the emphasis on people, on all the human toil, energy and brilliance that is science. The whole exhibit is made to look and feel like a working environment. Here Scientists (not in white coats!) pop up to explain what they do; a fold-up bike shows us how they get around; marginalia show their notes, their frustrations. One room shows us inside a young scientists office. Whilst we browse her DVD collection (Star Wars), papers deposited on her desk, cartoons plastered on her wall (xkcd), a video ‘shows’ her working in that space: coffee drinking, bored, agitated, patient, cold, wet, elated (“Dad, I’ve discovered the Higgs Boson!”) Data abounds, accessed and analysed far and wide through innovative cloud technology (recall that it was when at CERN in search of technology to enable better science that Tim Berners-Lee invented the World Wide Web) by people staring at laptops, writing email, spilling coffee. Another room celebrates the diversity of these (largely European) scientists, their passion for discovery, and – in moments that question the theory that validated the whole exercise – the lingering question they seem to share: why did the Big Bang privilege the creation of matter? 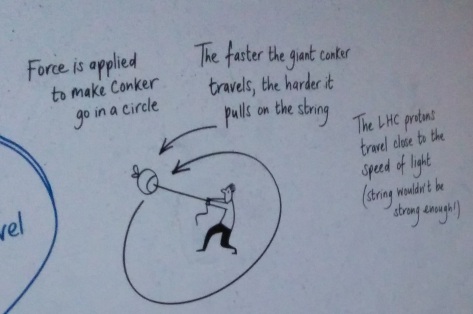 Collider is a remarkable and charming exhibition that uses human behaviour to disarm us, to engage us, to help us understand. It is a vivid depiction of science as a human activity, a theory driven activity, a subjective activity. This is not the science us humanists tend to compare our work, our methods to. As many of us begin to experiment with digital methods which look, compared to most History or Lit post the cultural turn at least, somehow ‘scientific’ – work full of counting, graphs, talk of data, code, research teams – we might for the good of the debates and battles to come, do well to pop down to the Science Museum, step inside the world’s greatest experiment, and consider anew what science looks like.

One thought on “Lessons from science part two: at Collider”